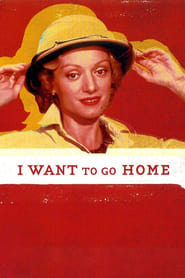 I Want to Go Home

Joey Wellman, an American cartoonist from Cleveland now largely forgotten at home, visits France with his partner Lena to attend an exhibition in Paris about the comic strip (bande dessinée) which features his work. He also hopes to be reconciled with his daughter Elsie who has been a student in Paris for two years, in flight from the American culture of which she sees her father as a typical example. Elsie is naively infatuated with French literature, and is trying to secure an introduction to the brilliant university professor Christian Gauthier, an expert on Flaubert but also an enthusiast for comic books. The meeting of father and daughter goes badly, but Elsie is persuaded to join Joey and Lena for the weekend at the country house of Gauthier’s mother, Isabelle. During a comic-themed masquerade party, all of the characters are made to reconsider their present and past relationships.